B.B.T. has been founded by Arlette van Dijck and Bob van Heyst during autumn of 1986. The first shop measured only 20 m² and the first stock consisted of 3 pallets of mainly restoration and performance parts from California, delivered by a truck on the lawn in the garden of Bob’s parents. Pure hobby. When customers came a few weeks later, speaking another language than Bob’s native tongue, he realised this was serious business. After a year a warehouse of 40 square metres from the neighbour has been added even after the attic of this parents’ house and the garage of his father’s car were already taken by Bob!

Two years later Arlette and Bob moved to an old pig farm where they transformed the stables into a shop, work premises and warehouse with a large parking lot, near the E19 highway Antwerp-Breda. 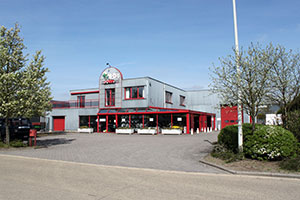 The story continued, BBT kept on growing. Some years even more than 100%. Growing pains made that the warehouse became again too small and after 4 years in the old farm new premises were built in Sint-Job-in-‘t-Goor. After several renovations this building remained the soul of BBT till the spring of 2011. The administration as well as purchase and sale department were located in this building and almost all parts, orders were handled from here.

After expansion and reject of different activities concerning the old Volkswagens a new building was erected in 2003 on the adjacent building lot. One of world’s most famous Volkswagen collection was housed in this building. Partly Bob’s private collection, partly a commercial collection of vehicles for sale. 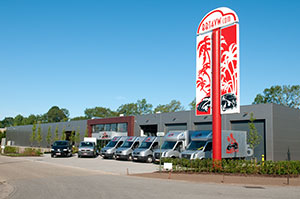 Due to the very strong expansion of our hobby  we started in the autumn of 2010 with the building of new and modern premises on almost the same location in Sint-Job-in-‘t-Goor.
The building takes up 4140 m² of which 2530 m² warehouse dedicated to our air cooled Volkswagens, a showroom and work premises of 1310 m²  for our collection vehicles, a shop of 260 m² for small and larger purchases and 310 m² with hyper modern offices and the necessary equipment for an excellent service. Click HERE to take a tour.

If you are looking for a classic car with Volkswagen roots, you’ll find here without any doubt  the car to your taste. Apart from the ‘usual’ beetles and buses of which the engine sits at the rear, BBT is  specialised in originality, cars in first paint and/or other Volkswagens curiosities. Volkswagens which used to speak to Bob’s imagination, he has them now in his own collection or he had the luck to sell them once. There are among other things a couple of schwimmwagens, kubelwagens, KDF cars, cherrypickers, laddertrucks and coachbuilds such as Rometsch, Denzel, Dannenhauer… etc. which entered and left BBT.

At present BBT is a company with limited liability, still managed by Bob, Arlette and a team of more than 20 enthusiasts with each his own specialities. With a range of products, only dedicated to air cooled  Volkswagens and Transporters with rear wheel drive BBT is in this matter one of the biggest in the world. A very extensive selection  at an almost perfect ratio of price/quality are surely the cradle. Our strive for perfect price/quality has led BBT to start with the development and production of parts of the own brand, recognisable at the packing specially developed by our marketing department. With more than 300 suppliers and many more customers from Tokyo to Los Angeles, BBT delivers with his expanded network throughout the world. By visiting customers and suppliers and by attending meetings around the world the company’s philosophy and passion stay upright without any problem : to help the  Volkswagen fans and/or users to find the desired parts in the quickest way  at the best price.