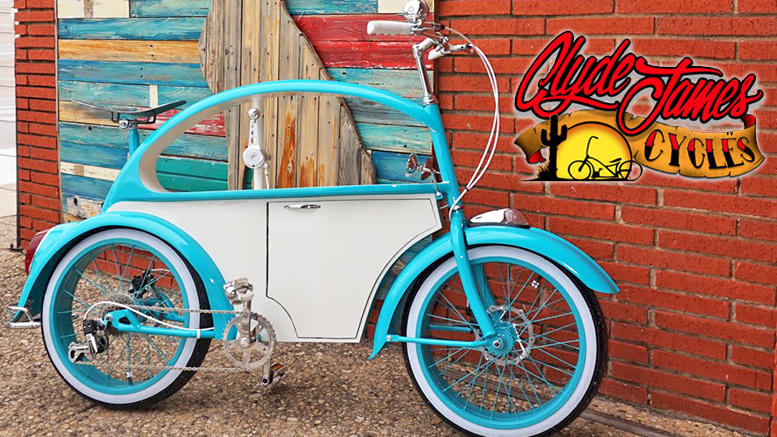 After running an online community for bike builders for 11 years you have a tendency to feel like you’ve seen it all. Then along comes a build that really makes you stop and take notice…actually, it makes your eyes bug out! In this case we’re referring to Clyde James’ latest wild and wacky creation…the VW Beetle Bike. It made its recent debut at the OBC gathering in Las Vegas and people have been talking about it ever since.
Clyde James has been building killer bikes in his shop in Haltom City, Texas for several years now and he’s quickly becoming a household name in the world of custom cruisers. Because of this reputation, he’s the go to resource in the North Texas area for fabrication, bikes and parts. This is where the story of the VW Beetle Bike begins.

In order to understand the motivation behind this build, we have to take a few steps back and examine the work of Japanese artist Hotaka Saito. Hotaka is known for building tricked out VW’s and Porsches, but he is also an artist that does work for Hot VWs Magazine as well as Street VWs in Japan. One of his illustration projects was the EMPI GT-Vike. This illustration popped up on our forum a few years ago and it had everyone wondering if it was a real project or just a spoof in a magazine. Eventually the ad caught the attention of Doug Gipson and he knew it needed to be built. Clyde says…

“My friend Doug came through the shop one day after finding this drawing and asked if we could make his dream of owning the world’s first VW Beetle Bike a reality. After some planning and budget management, we started the task of building the bike from a picture that was illustrated by a man all the way on the other side of the world. Needless to say, we had a lot on our plate, but I was confident that we could make it happen” 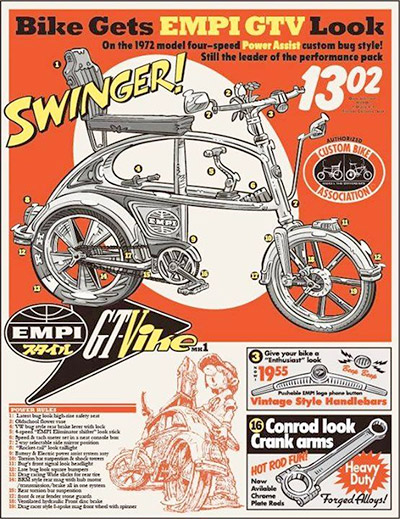 As with many custom bike builds, an upcoming gathering or show is usually the motivation that drives the timeline. In this case it was the OBC 2017 gathering in Las Vegas that was scheduled for April 19. This gave Clyde and Doug about 3 months to complete the bike from start to finish. 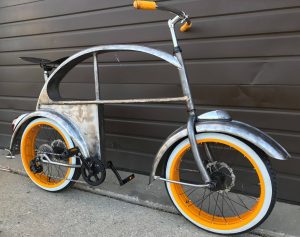 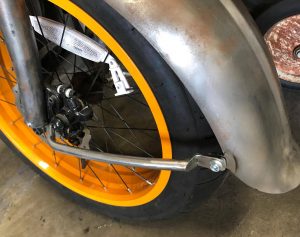 “From the beginning it was a lot of trial and error. I always say a lot of what I do is create a problem then create the solution. With this build it was no different. From the internal skeleton, to the sheet metal work, each part of this build was time consuming to design and fabricate. Once we had the main part of the VW Beetle Bike built, Doug decided he wanted a suicide door on the side that he could open and use for storage. I was a bit worried about pulling it off due to the short amount of time we had. There were only two weeks before OBC 2017 and we still had to paint everything.”

In the spirit of creating a problem and then a solution, Clyde and Doug decided to make two suicide doors with a full interior and upholstery! As you can imagine this required many long hours of hard work, but in the end, it turned out to be worth the extra effort. 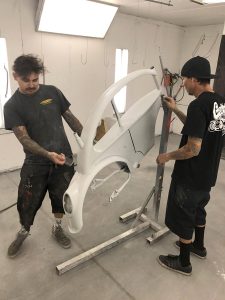 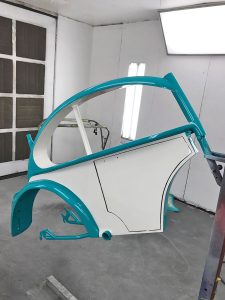 You can’t work on a project like this without expecting some challenges and difficulties to come along with it. In addition to the tight timeline for the build, Clyde mentioned a few other hurdles that they had to jump.
“When choosing parts for a unique build like this, sometimes a part you think will work perfect ends up not working as you expected. From the 20”x100mm 7 speed disc brake wheels and the Boxkars shifter, we wanted the bike to be an everyday rider. Since its unveiling at OBC 2017, the bike has almost a 1000 miles on it. Doug likes to get out and ride his bikes.”

“Paint was also an issue…deciding what color combination and style of paint job we wanted. After much talk and deliberation we ended up going with turquoise blue and cream to give it that old school Bug look.” 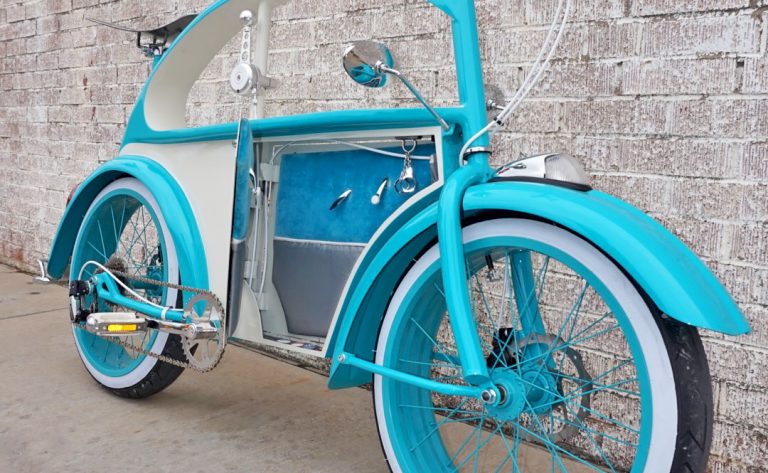 Clyde enlisted the help of his friend Tony Cano, owner of Evo Time Customs in Fort Worth, Texas who is also known as GMG Tony for his work on the TV show Fast & Loud. With only one day left before needing to leave for the OBC show, Tony, Steven and Clyde stayed late at Tony’s shop to knock the job out.

“So the rush was on! We had to get the bike assembled before the long drive to Vegas that night. We assembled everything in about 5 hours, taking our time to make sure nothing got scratched. We made the first official test ride at 1:30 am that night. After we knew everything was complete, we all went home to get ready for the trip. Within a couple hours we met back at the shop and headed out on our 18 hour drive through the desert to Vegas!” 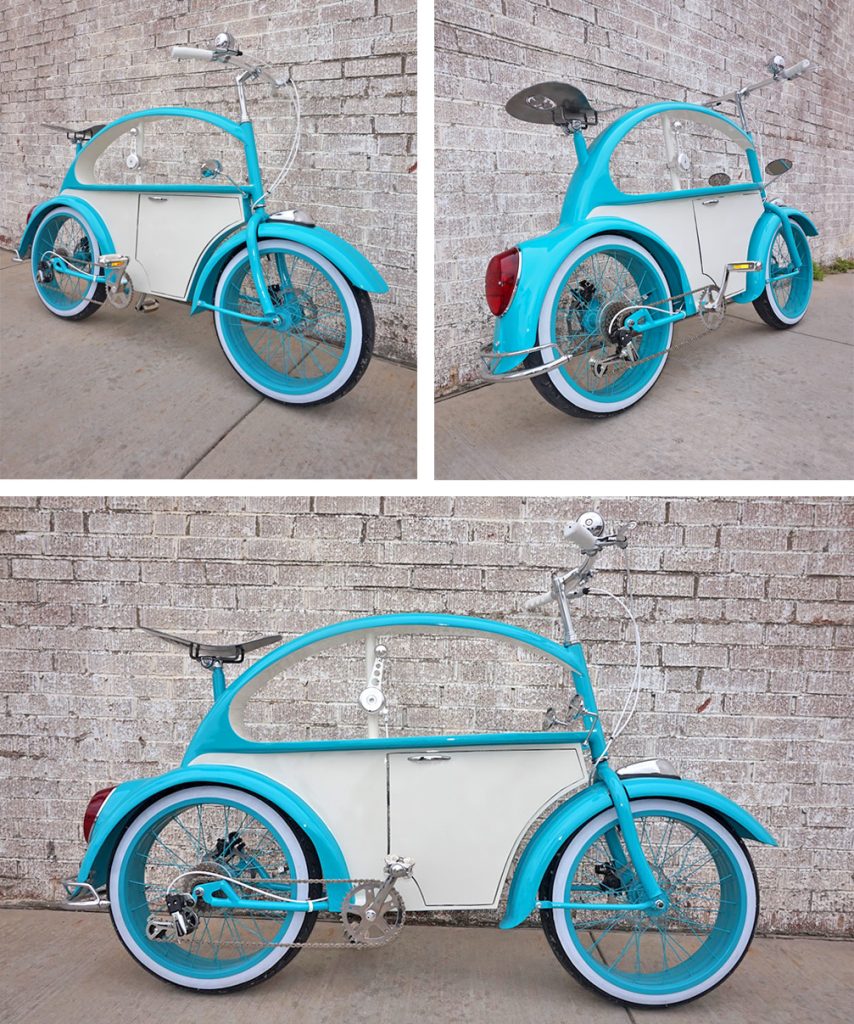 The VW Beetle Bike did make it to Vegas as planned, and as expected, it was a big hit.

“Within two hours of unveiling the bike at OBC 2017 I was able to talk with Hotaka Saito through Facebook thanks to RRB forum member Brian Palmer. Hotaka was very happy that someone had finally made his drawing a reality.” 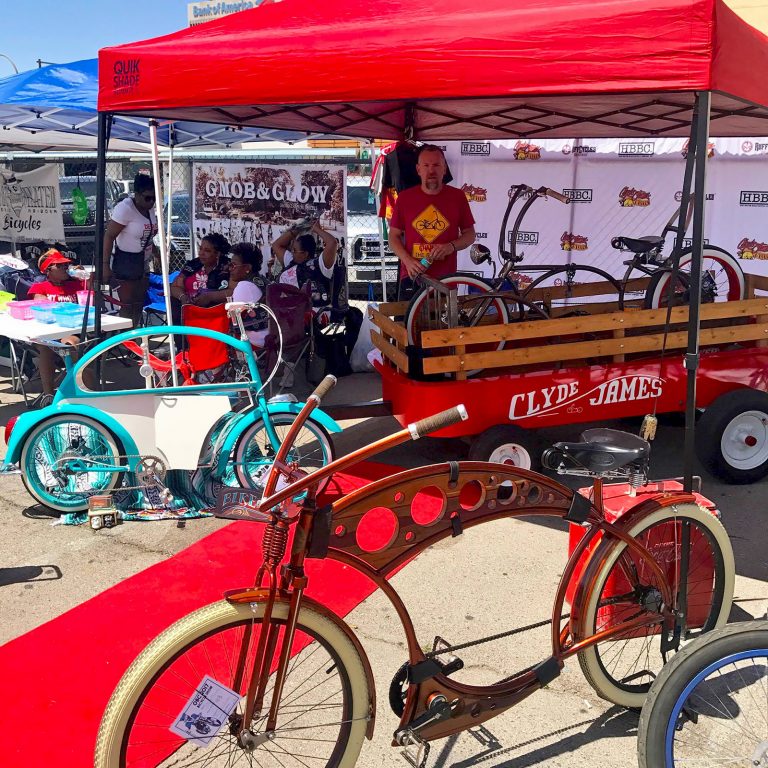 Since the unveiling, Clyde has had a lot of people asking about purchasing a bike of their own and currently he’s trying to get a manufacturing deal set up to bring the VW Beetle Bike to the masses. If anyone has any suggestions, he’d love to hear from you about a source. “Right now we are hand building each bike so it takes a little time to complete each individual build and paint it to the customer’s specifications.” If you are interested in having a VW Beetle Bike custom built, you can contact Clyde’s shop directly to place an order.
We love shops like this that are willing to push the envelope and break creative boundaries. It’s also fun to see builders who love what they do and have fun doing it. We’re looking forward to the next amazing build to come out of Clyde James Cycles’ shop. Until then, make sure to contact him for any custom work or parts that you may need.
Clyde James Cycles
4201 Stanley Keller Road, Suite B
Haltom City, TX, 76117 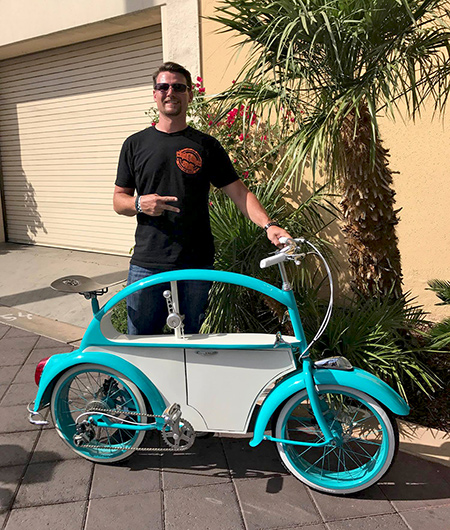